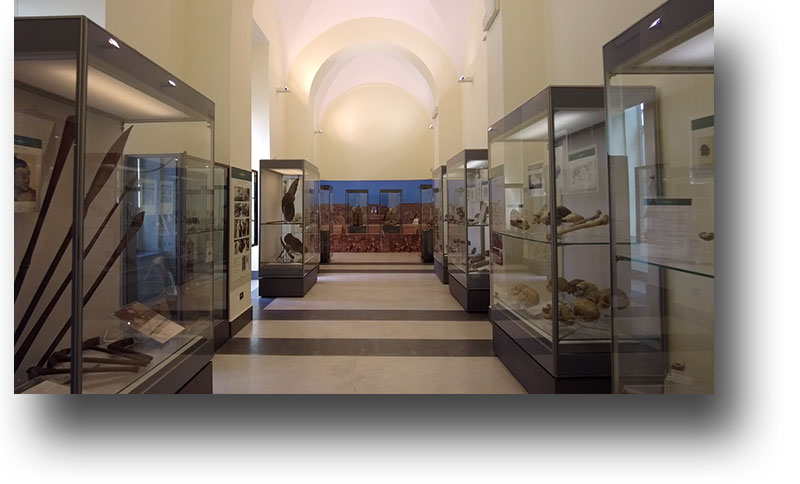 Exhibition hall of the Museum of Anthropology.

Over 26,000 artefacts, prestigious osteological, archaeological and ethnographic collections, mostly dating back to the 19th century, make up the anthropological heritage of the Museum. The human osteological collections, around 3,000 artefacts, including the Nicolucci Cranioteca, represent an irreplaceable biological archive. Worthy of note are four recently restored South American human mummies from the pre-Columbian era.

Prominent among the historical casts of human evolution are the infant skull of Australopithecus africanus made by R. Dart in 1925 and the skull cap of Homo erectus pekinensis realised in 1936 by F. Weidenreich.

Valuable collections of lithic and archaeological artefacts, such as bifaces from the Palaeolithic period, polished stone axes from the Neolithic period and ceramics from the Metal Age, document prehistory in various locations around the world. Maori ceremonial poles, African leather shields and ethnographic objects from Asia illustrate the culture of indigenous peoples.

Particularly interesting is the collection of facial casts made by L. Cipriani in 1927-1930. Noteworthy are the casts of victims from S. Paolo Belsito and Herculaneum, which bear witness to the tragic effects of the ancient Vesuvian eruptions on mankind.

Singular findings of tattooed human skin testify to the research conducted in the field of Criminal Anthropology by Abele De Blasio, a doctor and naturalist from Campania and a follower of Cesare Lombroso.

The Museum of Anthropology was founded in 1881 thanks to the intervention of Francesco De Sanctis, then the Kingdom of Italy’s Education Minister. Thus, with the contemporary establishment of the Chair of Anthropology, one of the first in Europe, the study of modern human sciences began in Naples. The precious private collections of Giustiniano Nicolucci, an eminent anthropologist and the Museum’s first director, constituted the original nucleus of an anthropological patrimony which other authoritative scientists gradually enriched until the vicissitudes of the Second World War hit the Museum. In 1950, the illustrious biologist Mario Galgano saved the collections from dispersion by storing them in trunks.

The real rediscovery of the Museum began during the centenary of its institution with an intense work of historical reconnaissance and recovery of the collections. The anthropological patrimony was exhibited for the first time in the current location of the former Collegio Massimo dei Gesuiti in 1999. The acquisition of a new room in 2019 allowed to expand the exhibition with prestigious finds rediscovered from the deposits. Currently, the Museum’s exhibition area is about 300 square meters.